By Tatjana Bladt CohenJuly 19, 2018 No Comments

With distinctive and inviting light, Laura Andalou’s photographs lead the viewer into the world of those whose stories she wants to share. We met up recently in her eclectic Amsterdam apartment to talk about how she aims to help others by shining this beautiful light on difficult places and global issues. I wanted to know more about her chosen medium, photography, and how she uses it to make the wider world aware of the stories of those who can’t share them themselves.

“To define darkness, light has to exist. And vice versa, where there is light, the existence of darkness can’t be denied. It is a reflection of the melancholy of life” – LAURA ANDALOU

Beginning her photographic journey at the age of 10, Andalou explains how, she has had two passions in life: fighting for the rights of animals and humans as an avid supporter of WWF and Greenpeace, and wanting to be a doctor and work for Medecins Sans Frontieres (MSF/Doctors Without Borders). In a way, she has since achieved these dreams. A self-described ‘serious and structured’ child, Andalou desired a more creative and philosophical path at de Vrije Universiteit, studying Cultural Studies, with a focus on cinema, influenced by a passion for film noir and the Nouvelle Vague. In the meantime, she developed her skills as a freelance photographer, and started working with MSF, which she currently combines with studies in International Law.

Andalou has since used the combination of hopeful light and mysterious shadowplay in her work to bring people together in order to create a change. The stories don’t end however when leaving the subject matters. On the contrary: like her photographs, they are effervescent. Whether giving workshops to Syrian children at a refugee camp in Jordan or having indigenous protesters in Argentina in front of her lens, Andalou remains in contact  with those she has photographed when possible. It is an attention to detail which shows through in her photographs, a human approach and working together which should be aimed for when documenting these issues.

From projects on climate change in Iceland to documenting the refugee crisisin Uganda, Andalou uses her photography to draw the viewer in; firstly via aesthetics and secondly to the story behind it. It is this soft subtlety, through light and colour, that can be connected to both Andalou’s attitude and style. Influenced by her love of cinema, she explains how it is the magical times of day, the golden hours of dusk and dawn with their dream-like quality, which she is explicitly drawn to, as seen in her series featured below, ‘Le Rêve Rose’.

This slight turn away from the harsh reality does not draw away from the weight of the actual subject matter, as becomes clear when we move on to discuss how the issue photographed can still be striking without assaulting the viewer. Andalou gestures to the print on the wall beside us (‘The Enclave’ by Richard Mosse). It is is of a Congolese man in the woods holding a big gun, bathed in the now iconic fantastical magenta tones. It is an image which Andalou finds the ‘most beautiful thing’ she has ever seen. In this series, Mosse uses Kodak Aerochrome, an infrared surveillance film that renders greens into shocking acid pinks and reds. The aesthetics are being used  in order to regain focus on the decades-long war in Congo. It allows the viewer to be drawn into the beauty of the series, before realizing what truth and story is beyond these aesthetically pleasing images. It is these creative approaches to documentary photography that are intriguing as they can be used for ethically challenging issues, such as conflicts or human rights violations.

During our time together, it is Andalou’s self awareness and reflection that captures my attention. It is clear that communicating her intentions to her photographic subjects is of the utmost importance to her, whether that is done by using hand gestures, basic phrases or a translator,, “and if they don’t want to be photographed, no matter how beautiful the image, the image won’t be used.” A child won’t be photographed without a parent’s consent. She will ask if the person is in danger and whether or not a photograph shown to the world might put them at risk. It is ethical practices like these that we at Impact Journey are always so enthusiastic to hear, to take into account, and hope to impart onto others.

Unlike the quick, reactionary, and sometimes graphic style of photojournalism, Andalou also describes how repeating stories, when they have been told before is a way in which photography can have a impact on its audience. The drawn out effects of conflicts, such as people fleeing North Korea through the mountains of China or the human impact of climate change, are stories that are forever present, says Andalou, which even though  they may not have that ‘shock factor’ anymore, still need to be told.

This brings me to the photograph which was the initial reason we contacted Andalou. It is an image from one of her first missions for MSF at a refugee settlement in Palorinya, Northern Uganda in May/June 2017. While stories of refugees are nothing new, they still need to be told, to gain worldwide recognition. During Andalou’s time in Uganda, there was a sudden influx of refugees fleeing violence in South Sudan. Andalou explains how the rainy season had commenced, causing floods throughout the settlement, making many homeless, causing crops and newly build homes to be destroyed and stagnant water resulting into threats of cholera and quick increasing numbers of malaria. This was the story she found needed to be captured and told – the life of people after having fled a conflict and how the story only starts there. 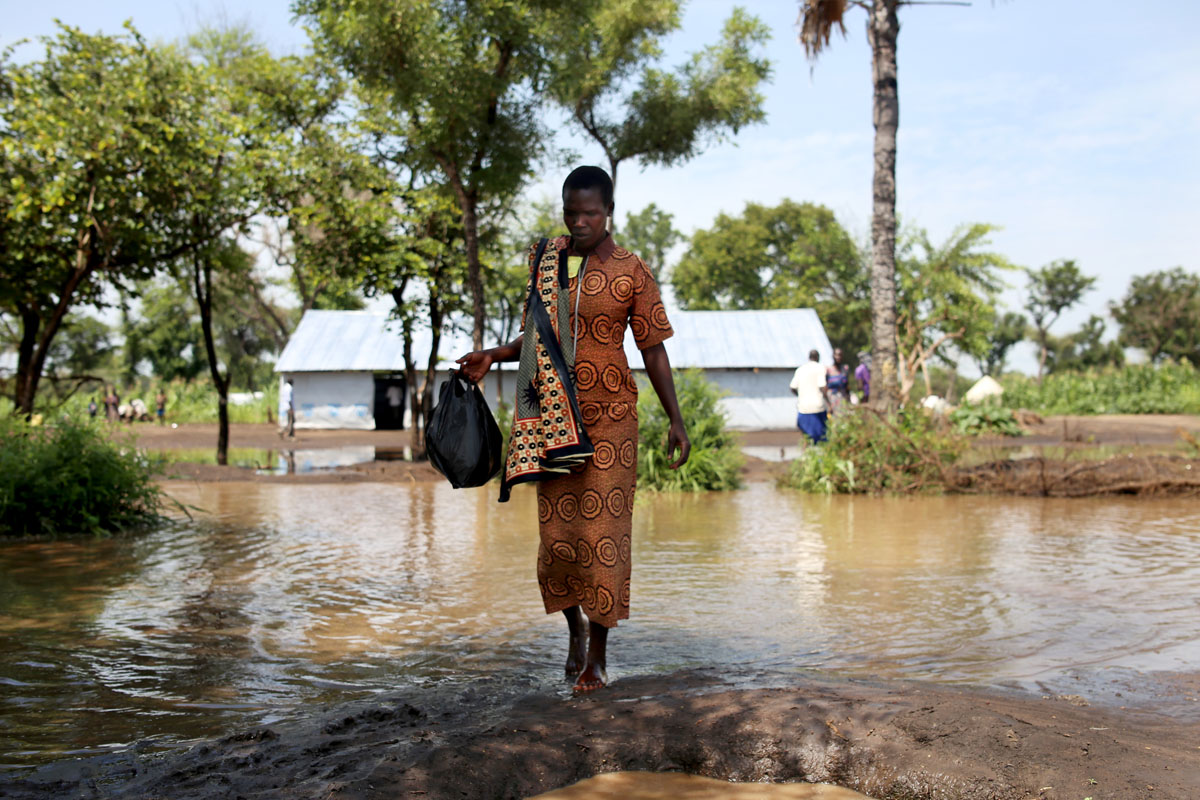 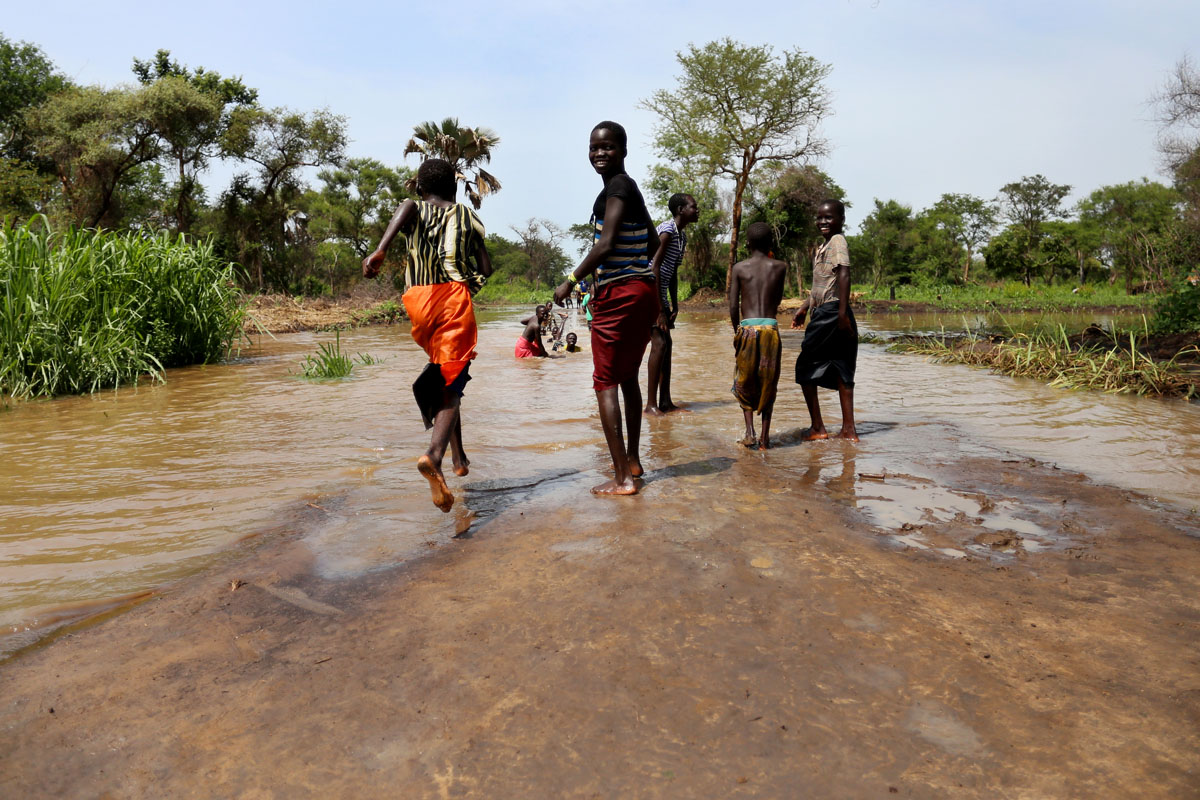 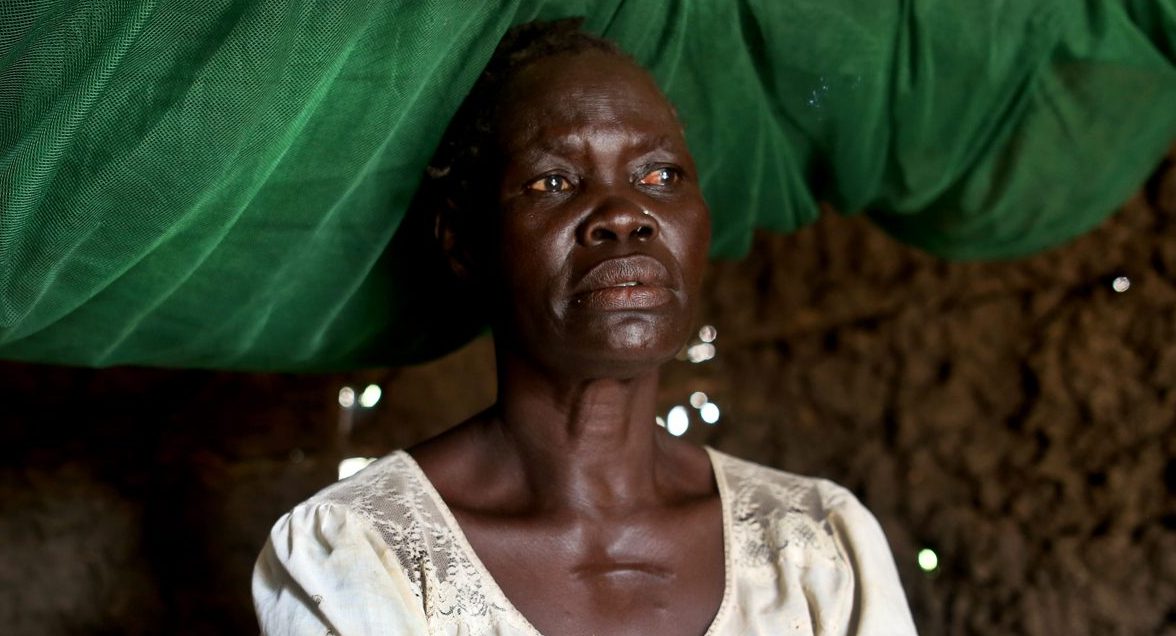 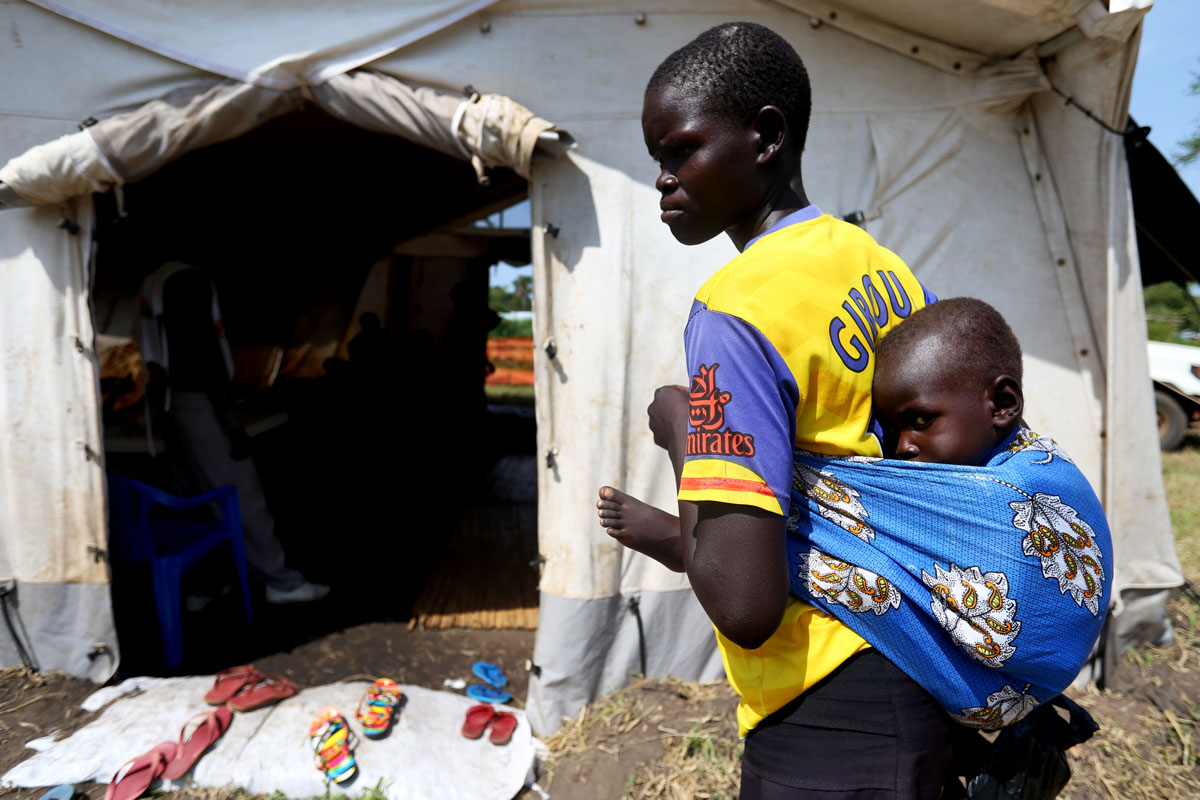 Another important process which Andalou explains is how in order to get a better picture, she has to know more about the person’s background story, regardless if there is a common language. She explains this is why she may initially not even take a photograph, but instead show true interest in who and what she is photographing, and gain their trust. It is a considerate practice which allows documentary photographers to show their subjects as individuals. This is how, in 2015, she managed to get inside the protests camp of the indigenous people of Argentina, in the middle of the widest avenue in the world: Avenida 9 de Julio in Buenos Aires. These indigenous people have had peaceful protests throughout the course of history, but keep facing violence from military forces. For example, they are often rejected in society due to denying them identification cards, resulting them into not having the  the possibility to vote, which in itself makes it difficult to have their voices heard. They are being forced to leave their lands or even the country. During the election period in 2015, for 10 months they remained there in the hopes of drawing attention towards the competing presidential candidates. Unable to let this issue pass by unnoticed, Andalou returned to the city two months after the first visit and contacted a Dutch journalist in Buenos Aires to try to gain access. With some patience and perseverance, she was able not only to enter the camp and photograph, but within three weeks she had also been invited to the border of Paraguay to attend a conference on the issues of the main large indigenous groups of Argentina.

However, despite an article that has since been published on VICE, these problems in Argentina still remain relatively unheard of in the rest of the world, much to Andalou’s frustration. So, as she reiterated, this is why stories like these need to be repeated again and again by photographers and journalists alike – to make sure they are not forgotten. While still at the start of her career, Andalou’s natural ability to find the beauty and the light in her surroundings goes deeper than surface level. Her  ability gauge when to take pictures and when to stop, when to listen and when to tell the stories of others, and if needed, when to ‘make that person human again’ through her work – these are qualities which takes some photographers years to learn, making her work even more exciting to see. 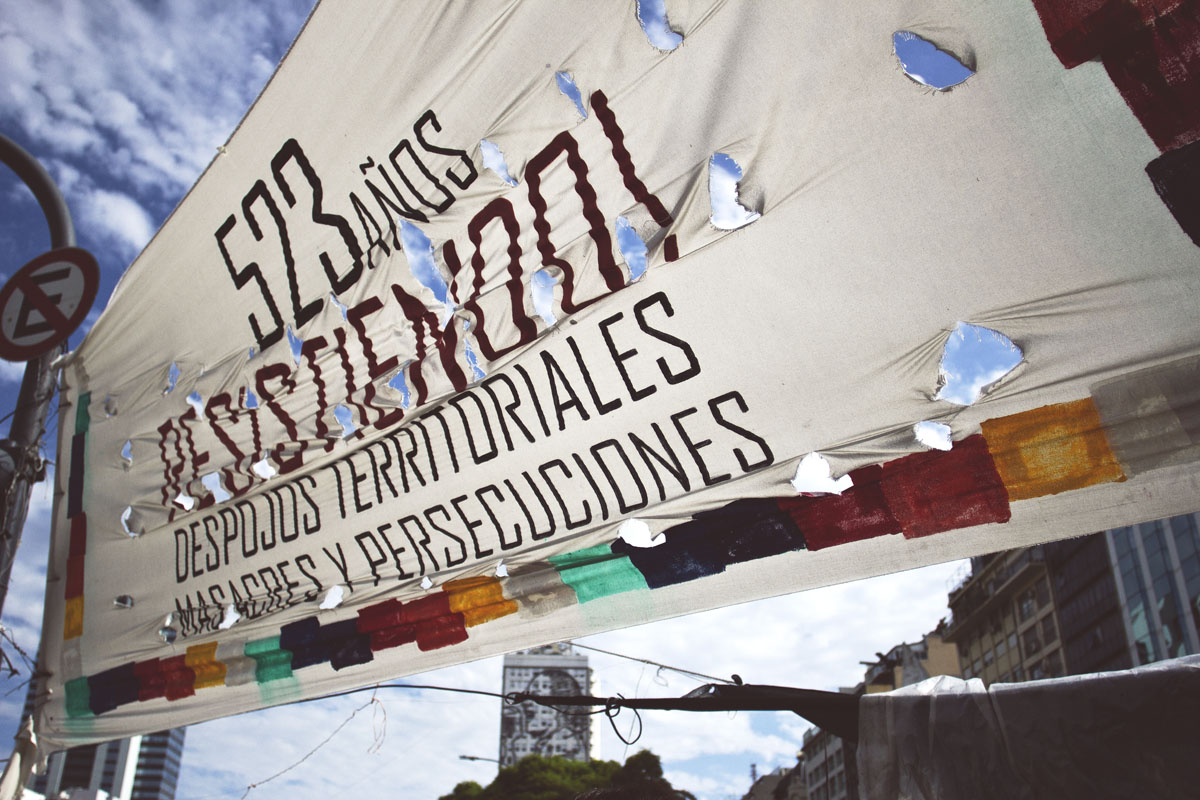 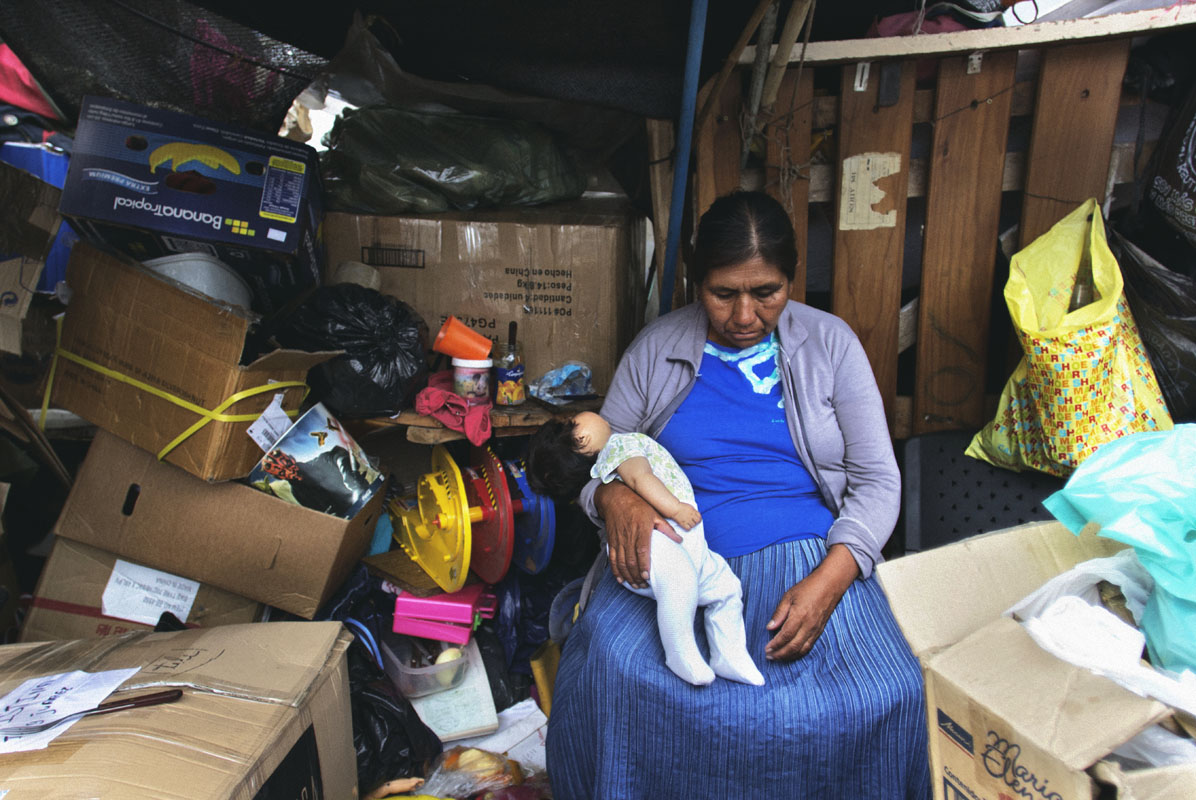 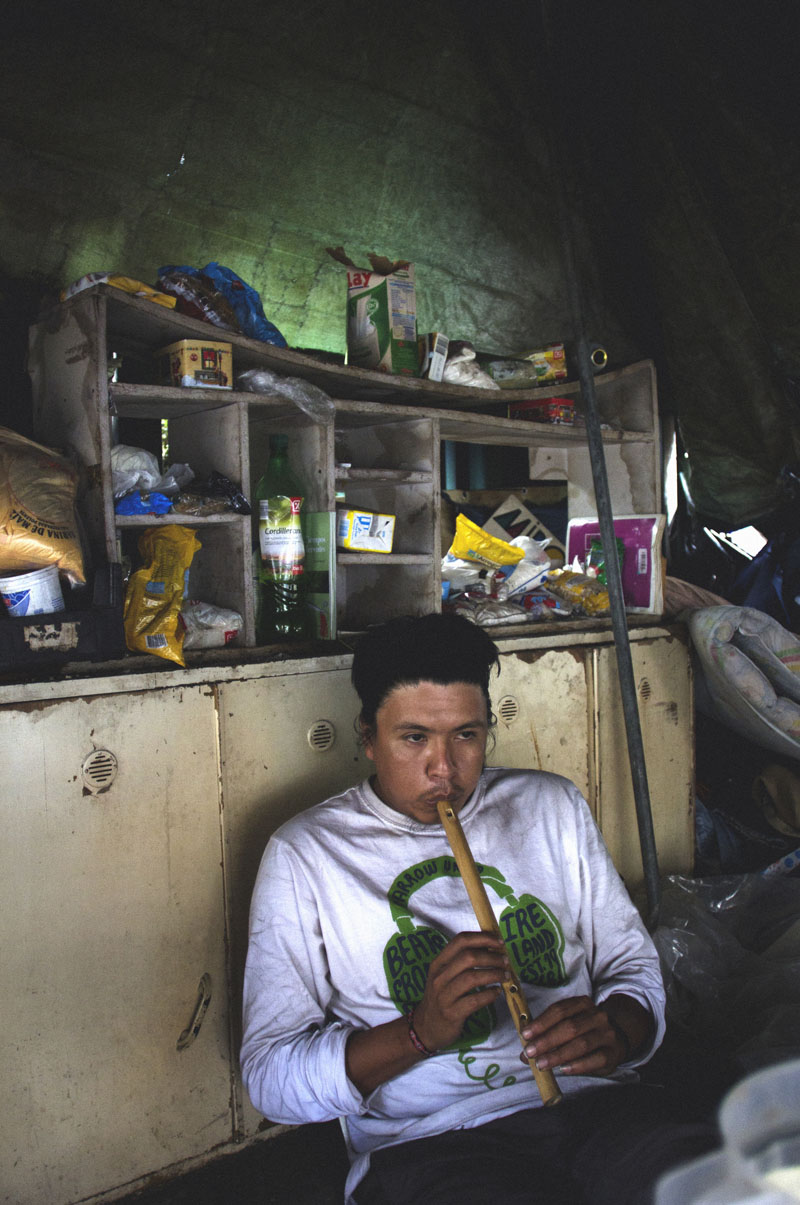 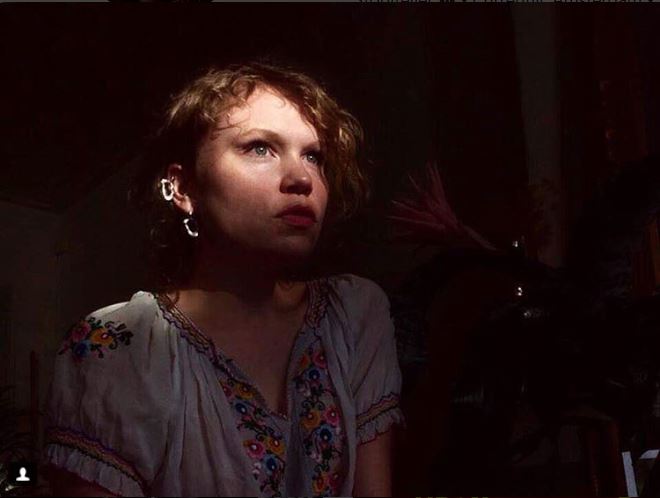 Laura Andalou (b.1988) studied BA in Cultural Studies and Art History at the Vrije Universiteit, Amsterdam (2012). Currently Andalou combines photography with a full time job at Médecins Sans Frontières (MSF) and studies in International Law, bringing together her great loves of Visual Storytelling and Human, Animal Rights and Environmental Issues